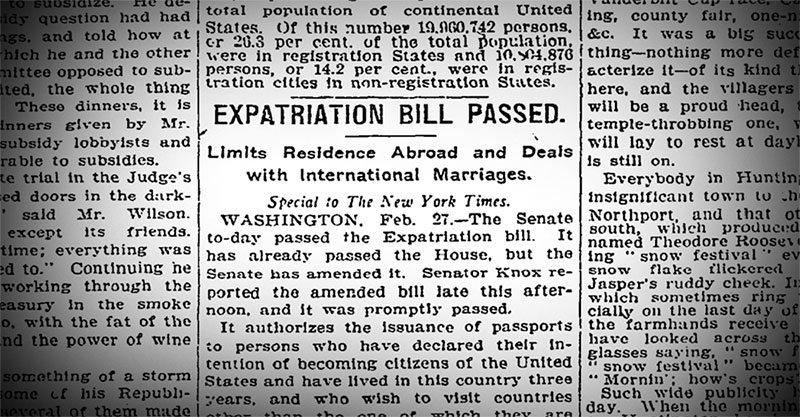 Imagine accidentally losing your citizenship… simply because of the person you got married to! In the early 20th Century, thanks to a law called the Expatriation Act of 1907, thousands of American women found themselves in quite a pickle. This video explains the history:

The documentary film referenced at the end of this video is The Way to Andina.

The law stayed in place for several years, stripping several thousand American women of their citizenship, whether they knew it or not when they got married. The law was later updated to omit this clause after women obtained the right to vote and became a political force in their own right. But Congress didn’t formally apologize for stripping American women of their citizenship until quite recently:

In 2013, Daniel Swalm, the grandson of a Minnesota woman who had lost U.S. citizenship under Section 3 of the Expatriation Act of 1907 for marrying a Swedish immigrant and died without regaining her citizenship, began lobbying Congress to posthumously restore citizenship to women like his grandmother.[16] He contacted his senator Al Franken, who in 2014 sponsored a resolution (S.Res. 402) expressing regret for the passage of the 1907 Act.[17][18] The resolution passed the Senate on May 14 [2014].

And the Expatriation Act of 1907 wasn’t just a symbolic measure either; it affected thousands of American women in all sorts of ways. If you were a citizen one day and not a citizen the next, you lost various legal rights. The text of the Senate apology contained examples of how several American women who lost their citizenship were affected by the law:

Whereas section 3 of the Expatriation Act of 1907 affected numerous women, such as Florence Bain Gual, a New York City school teacher whose tenure was stripped after 15 years of teaching because she married a foreign national, causing them to face difficulties providing for their families because they lost, or were not able to gain, public employment after marrying a foreign national;

Whereas section 3 of the Expatriation Act of 1907 prevented women in the United States, such as Ethel MacKenzie from California who was unable to register to vote because she married a foreign national, from participating in the political process and casting ballots in various elections[…]

The documentary film The Way to Andina details the story of another descendent of a woman who lost her citizenship quite accidentally after marrying a foreign born man (in that case from Colombia).