The Republican Party has never had a rosy relationship with gays and lesbians, and this incident probably didn’t help much.

It was January 1995, and Republicans had swept into power a few months beforehand. The new House Majority Leader was Dick Armey, a conservative Republican.

Armey, who had been elected from Texas (where a string of murders of gays had recently happened), was known for opposing hate crimes legislation protecting gays and lesbians. 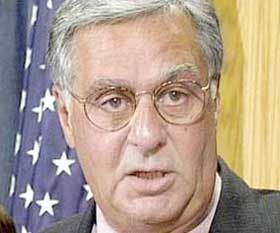 Above: A real Dick, Mr. Armey

In criticizing a fellow Representative, Barney Frank (D-Massachusetts), who is openly gay, Armey referred to him as “Barney Fag” in an interview.

According to a column published in the New York Times a short time after the incident, Representative Armey tried to get reporters not to air the tape of him using the word and, failing that, attacked the press for reporting about it.

Armey later claimed that he merely mispronounced Representative Frank’s last name. Frank responded after hearing of the incident, “I rule out that it was an innocent mispronunciation… I turned to my own expert, my mother, who reports that in 59 years of marriage, no one ever introduced her as Elsie Fag.”