Although it’s hard to contextualize today, during the 1950s, ’60s and ’70s, the FBI was secretly engaged in a wide-ranging and largely illegal counterintelligence program within the United States.

COINTELPRO as it was dubbed, was formally meant to protect the United States from elements deemed “subversive” by the US government. Many of these supposedly “subversive” elements included harmless Civil Rights activists like Dr Martin Luther King, whom the FBI wrongly suspected as being communist. 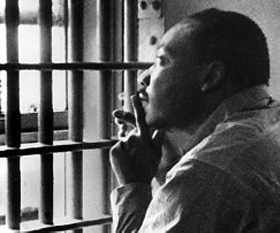 Above: Dr King in prison, one of the many times he was arrested for civil disobedience

The program was uncovered in 1971 when a group of anonymous civil liberties activists broke into a Pennsylvania FBI office and stole reams of documents revealing the illegal activities. The documents were then leaked in a series to the media, which (after some initial hesitation) began to publish them, provoking a Congressional investigation and reforms within the FBI.

Among the classified documents which were subsequently released (though millions more remain classified), are documents that reveal that FBI agents secretly engaged in operations meant to harass Dr. King. As the leader of the COINTELPRO operation >said in a classified memo, “We must mark [King] now, if we have not before, as the most dangerous Negro in the future of this Nation… it may be unrealistic to limit [our actions against King] to legalistic proofs that would stand up in court or before Congressional Committees.”

After the FBI had been illegally tapping King’s phone, they believed they had evidence that he had been engaging in an extra-martial affair. Just before he was set to receive the Nobel Peace Prize, they mailed him tapes of the recorded phone conversations along with a letter which they pretended was written by African Americans threatening to expose him, unless he did “the only thing left for you to do. you know what it is… You are done. There is but one way out for you. You better take it before your filthy fraudulent self is bared to the nation.”

King obviously didn’t kill himself, and instead fought for Civil Rights for another four years until being assassinated. To read the declassified portions of the secret FBI letter, click here.