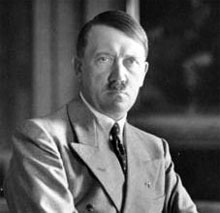 When Adolf Hitler died at his own hand in 1945 he left behind Mein Kampf, his ideology encapsulated in a two-volume, 720 page set of books. But what’s lesser known is that he also wrote a second book, unpublished in his lifetime, which sat hidden in a vault until his death.

In 1928, two years after publishing Mein Kampf, Hitler penned his second book, which is now known simply as Zweites Buch (“second book”). While his first book was mostly autobiographical and ideological (explaining his hatred of Jews), the second book was to lay out his plans for Germany’s future foreign policy.

His publisher initially discouraged him from trying to publish it, fearing it would cannibalize sales of his first book, Mein Kampf. So it sat unpublished, with only two copies in existence until Hitler ascended to power in the early 1930s. After the 1930 Reichstag elections, the soon-to-be leader of Germany feared its publication would reveal in too much detail his foreign policy goals so he ordered it be kept secret.

And so it was, at least until 1945 when it was discovered in the vault of a German air shelter by an American officer. After its authentication by a former employee of Hitler’s publisher, the book was eventually made public for the first time. It’s now available for purchase.