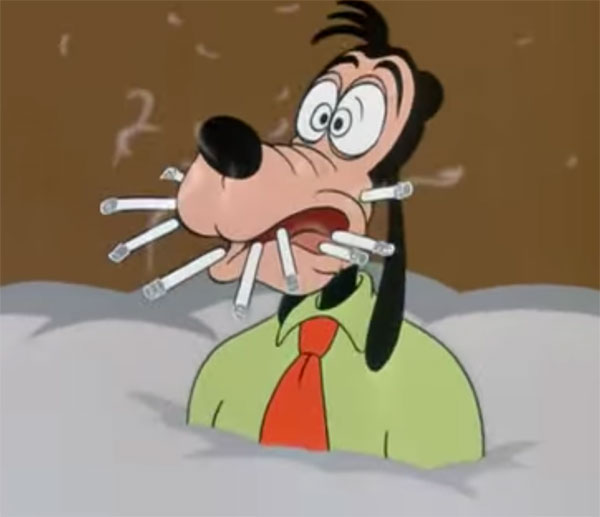 Goofy is a beloved Disney character created back in 1932. Over the years, children and adults have fallen in love with this dopey goofball as he stumbled his way through all types of chaos and problems. He was the star of many animated shorts, including the

However, this short called “No Smoking,” doesn’t feature the moral lesson you’d expect in Disney animations targeted at children. While Goofy does try to quit smoking, there is no real condemnation of smoking as a habit or discussion of any health concerns besides a brief issue with breathing. While his addiction is played for laughs and there are a few frames of dingy furniture and overflowing ashtrays, I was shocked to see that the cartoon presented a general shrug about whether or not Goofy actually quit. In fact, they referred to his attempt as a “strange desire.”

In the end, after running around the city looking for something–anything–to relieve his craving, he finally gets a cigar and the short ends with upbeat music as if now everything is great again. This is so unexpected from Disney, who announced last year that they would ban smoking in all their PG-13 and under films. But times have changed, and maybe some things are meant to stay in the vault.

Watch this short plus others in the DVD collection Walt Disney Treasures: The Complete Goofy.