The USSR Landed Multiple Probes on Venus in the 1960s 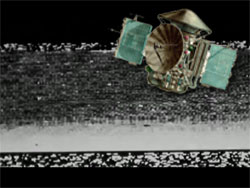 When we think of the space race, we generally think of initial race to put a human in space and the moon landing which followed (the former glory went to the USSR, and the latter glory to the USA). But what’s often forgotten is that the USSR actually beat America in landing probes on the moon, Venus, and even Mars.

The first man-made object to land on the moon was Luna 2 (after an unsuccessful Luna 1 attempted landing which missed its target by more than 3,000 miles), a Soviet probe. It made headlines on September 13th, 1959 when it reached its target and successfully transmitted data back to earth.

A few years later, in 1966 the USSR once again beat the USA in becoming the first country to successfully land a probe on Venus. The Venera 3 crash-landed on the second planet from the Sun on March 1st, 1966, though it was unable to send back any data to earth after landing (several unsuccessful attempts at a landing later, the Venera 7 eventually succeeded).

And the first Mars landing? That happened in late 1971, with the USSR’s Mars 2 lander, which crash landed on the martian planet’s surface. The subsequent Mars 3 lander succeeded in landing on the surface intact, and was able to transmit back a single blurry image (pictured above) and then unceremoniously shut down after approximately 15 seconds of operation.