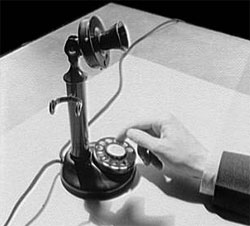 Today for most people who own cell phones, manual dialing is largely a thing of the past: your contacts are stored in your phone and you rarely have to type in a new number.

But that wasn’t the case in 1930: back then it was normal to pick up a phone and be connected with an operator who would then place your call for you. And for some in the early 20th Century, the thought of dialing your own phone number was downright scary.

In 1930 the US Senate took up the pressing issue of new manual-dial phones with the following resolution when dial phones were installed in their Congressional offices:

Bill sponsors hoped the measure would convince the phone company to remove dial phones from all of Washington, DC, not just Capitol Hill. The motion passed and though younger Senators preferred to dial their own numbers rather than wait for an operator to connect them to the party they wished to reach, the phones were banned. At least temporarily– a later compromise allowed Senators to choose which type of phone they wanted for their office.

Well, that’s the world’s greatest deliberative body for you.