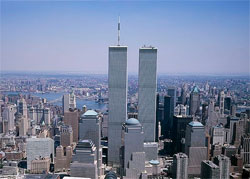 When the World Trade Center in New York City was first opened in 1973, employees didn’t have to worry about turning off the lights when they left work. Why was that? Because their offices didn’t have switches.

In the early 1970s, electricity was considered “too cheap to meter” so the building’s planners– in a show of bravado, if not wastefulness– opted to forgo the traditional on-off switches, meaning all lights stayed on indefinitely, or at least until a floor manager turned them off for the day.

After energy prices rose markedly over the the following decade, individual light switches and a programmable scheduling system were eventually installed in 1982.