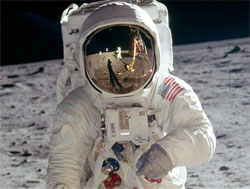 When Neil Armstrong and Buzz Aldrin first set foot on the moon on July 20, 1969, they made history. But one thing that didn’t make history that day was the backup speech that President Nixon was slated to give in the event that something went wrong on the mission and the astronauts were stranded 238,900 miles from earth.

Written by presidential speechwriter William Safire and not revealed until 1999, the speech was planned in case the astronauts had to be abandoned. In that scenario, according to Safire in a July 18, 1999 Meet The Press interview, “then they would have to be abandoned on the moon. Left to die there, And mission control would have to, to use their euphemism, close down communication. And the men would either starve to death or commit suicide. And so we prepared for that with a speech that I wrote and the president was ready to give that.”

Below is the full text of the speech that Nixon never gave.

IN EVENT OF MOON DISASTER:

Fate has ordained that the men who went to the moon to explore in peace will stay on the moon to rest in peace.

These brave men, Neil Armstrong and Edwin Aldrin, know that there is no hope for their recovery. But they also know that there is hope for mankind in their sacrifice.
These two men are laying down their lives in mankind’s most noble goal: the search for truth and understanding.

In their exploration, they stirred the people of the world to feel as one; in their sacrifice, they bind more tightly the brotherhood of man.

In ancient days, men looked at stars and saw their heroes in the constellations. In modern times, we do much the same, but our heroes are epic men of flesh and blood.

Others will follow, and surely find their way home. Man’s search will not be denied. But these men were the first, and they will remain the foremost in our hearts.

For every human being who looks up at the moon in the nights to come will know that there is some corner of another world that is forever mankind.

PRIOR TO THE PRESIDENT’S STATEMENT:
The President should telephone each of the widows-to-be.

AFTER THE PRESIDENT’S STATEMENT, AT THE POINT WHEN NASA ENDS COMMUNICATIONS WITH THE MEN:
A clergyman should adopt the same procedure as a burial at sea, commending their souls to “the deepest of the deep,” concluding with the Lord’s Prayer.